Jabalpur is one of the most important cities of Madhya Pradesh and is located at the center of the State. The city is situated in the 'Mahakaushal' region. Narmada River flows through the entire district and is also a major source of drinking water for the city. 'Bargi Dam' is a multipurpose project on this River. The city is located between 23º10' North latitude and 79º59' East longitude. Jabalpur district is spread over a total area of 10,160 sq km average elevation of 411 metres (1,348 feet)above the sea level. 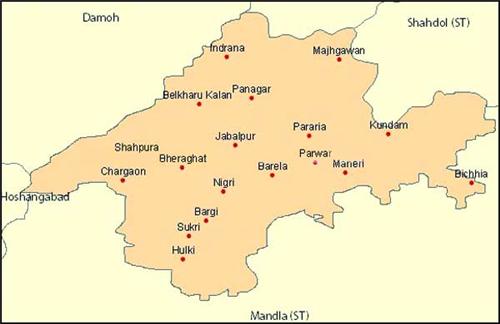 The population of the city is about 10.65 lakhs. The city is popular for its toys, terracotta items, Chanderi and Maheshwari saris. The picturesque landscape combined with the innumerable tourist spots, the city is a delight for any tourist. As per the 2011 census statistics, Jabalpur ranks as third largest urban agglomeration in Madhya Pradesh and the 38th largest in India.

The climate of Jabalpur is humid subtropical which is typical of North-Central India. In summers, the temperature goes up to 47°C however the temperature in winters goes down to 8°C. Summers are from late March to early June and Winters are from early November to early March. May is considered to be the hottest month and the weather becomes simply unbearable. It is not all advisable to go out for sightseeing. The monsoon season comes around July and lasts by September. The most favourable time to visit the city is between October to March. The monsoon season is welcomed by heavy rainfall and the weather too becomes pleasant at this time.The nature and its beauty is seen at its best during this time. Jabalpur receives moderate rainfall of 35 inches (889 mm) during the months from July to September due to the southwest monsoon.

Topography of the city is truly admirable. The rocky hills all around Jabalpur are full of mineral deposits and ancestral remains. Therefore, geologists and archaeologists visit the city from time to time for their research. The mesmerizing view of Narmada surrounded by marble rocks is a major tourist attraction in Jabalpur. Narmada, Vanganga and Hiran are the major rivers which flow through Jabalpur. Narmada is the largest among all the rivers and has many tributaries. The main water reservoirs of both Kahdari and Pariyat are located in the northeast of this region. 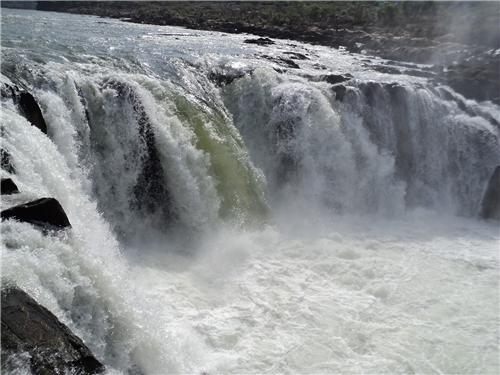 Water is also drawn from Narmada River by Public Health Dept. The main crops of the region are rice, wheat, oilseeds, pulses and maize. Bargi Dam on the river Narmada is used for irrigation, water supply and power generation. The town is surrounded by several lakes and water tanks. The area is rich in refractory clay, limestone, iron ore, bauxite, manganese and other deposits.There are few industries connected with above minerals in the area.

The city of Jabalpur is located in Mahakoshal region, on the divide which lies between watersheds of Narmada and the Son, more on the side of valley of Narmada, running through the gorge known as Marble rocks which falls 30 ft. over the rocky ledge called Dhuan dhar. There is a long narrow plain running north-east and south-west which is closed from all sides by highlands. This plain is covered by rich alluvial deposit of black cotton soil.

Jabalpur is well known for its richest forest reserves and panorama of wildlife. National parks namely Bandhavgarh, Kanha, Shivpuri and Pench are very close to the city. Some of the important forest formations which are found in Jabalpur are teak, sal, mixed forests, khair and medicinal plants.

The largest river in Madhya Pradesh and the fifth largest in Indian subcontinent is River Narmada. It flows towards the west and then falls into the Arabian Sea on the coast of Surat city in Gujarat. The total length of the river is 1312 km of which it covers 1072 km in Madhya Pradesh. "Narmada" is a word of Sanskrit language and means “Giver of Pleasure”. The water from the holy river is used for agricultural purposes and it is also major source of drinking water.The water from Bargi dam is used for irrigation, power generation and water supply. There are numerous lakes and rivers in the city of Jabalpur. Vanganga and Hiran rivers are the other two main rivers in Jabalpur.